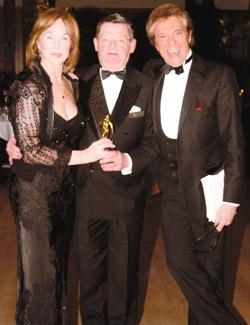 Credit: St Helens Star
DANCE supremo Keith Holmes has waltzed away with dancing's equivalent of an Oscar at a glittering industry awards ceremony in London.

The prestigious Carl-Alan Awards event, held in the Nine Kings Ballroom at Hyde Park's Royal Lancaster Hotel, saw Keith receive the accolade for Outstanding Services to Dance.' An original list of 68 nominees was whittled down to three and Keith got the vote ahead of Rashmi Patel, managing director of the International Dance Shows Company, and Len Goodman, chief judge on BBC TV's Strictly Come Dancing programme.


Toll Bar-born Keith said: "I have been to many awards ceremonies and watched quite a few on television and always thought the recipients were expected to feign surprise when their name was announced.

"Well, I was gobsmacked when compere Lionel Blair announced that the voting had come down in my favour.

"If I had been a betting man I would have put Len as a hot favourite for the award. He is, after all, the public face of dancing in his TV role.

"And Rashmi Patel, who is so well known in the dancing world, was also, I felt, way ahead of me. I thought I was just there to make the numbers up."

Not so surprised, however, were the representatives of all recognised dance associations and societies who are invited to nominate a worthy recipient of the Carl-Alan. They have seen a vast improvement in the operation of the International Dance Teachers Association since Keith accepted an invitation to take on the mantle of chief executive with a brief to re-organise the power base in Brighton. He has also taken on an ambassadorial role that whisks him to many countries in the world to fly the flag for dancing.
Apart from all this, Keith and wife Margaret, who danced professionally in their youth, also manage to juggle their lives to run - with the help of a dedicated team - the New Regency Dance Centre, based at the Eccleston Social Club in Knowsley Road.

Before that, they spent 40 years at the Regency Dance Centre in Pescot Road.

Modest Keith, who started life as an apprentice joiner with Pilkingtons after leaving St Austin's School in Thatto Heath, added: "Margaret and I have brought the magic of dance to thousands of adults and children in St Helens.

"People who felt they would never dance are able to glide around the floor, thanks chiefly, I must confess, to the fabulous talents of Margaret. She ranks as one of the best instructors dancing has known."

Keith's energy is further tested by the number of dance events he needs to attend in Britain, while he also has a role as a competition judge.

And Margaret paid this tribute: "Keith eats, lives and sleeps dance. This award is so richly deserved."

To cap his big night, Keith received his trophy from actress Shirley Anne Field, one of the many friends he and Margaret enjoy the company of at their new home on the south coast. He said: "That was the icing on the cake."
Item added : 3rd August 2019
by UCCrew