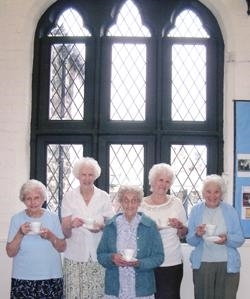 THERE'S a whole new life ahead for one of the most ancient buildings in the district. And the 300-plus members of Moss Bank Mission are currently celebrating its superb improvements.
For the 152-year-old stone mission, with its Victorian style fittings and neatly leaded arched windows now has a new roof and damp-free walls.

The £30,000 bill for major renovation attracted the attention of Ibstock Cory Environmental Trust (ICET) and they provided the funding. The renovations began in spring 2005 and are now newly-completed.

Leading the celebrations was Gertie Heyes, at 90 the oldest member. She first attended the mission school in 1927.Gertie says: "The mission has changed greatly since I attended its school as a young girl, but it has always been a large part of my life.
"It has remained at the heart of the St Helens community and it is splendid to see the building restored and enjoyed by many people who walk through its doors each day."

Local folk use the centre for a range of social activities and events, from dance and arts classes to special concerts and the weekly Darby and Joan Club.

With its quaint bell tower, the mission is the only centre in the area to cater for such a wide variety of classes and clubs and it also holds a monthly church service.

Built in 1855 it was donated to the local community by Lord Daresbury for the education of local children. Although the day school closed in 1978, the mission remains a hub of life and in 2005 celebrated its 150th anniversary.

Jim Marsh, fund-raising co-ordinator, said: "When a remedial survey bore the grim news that £30,000 was required to keep it open, we were at a loss. Luckily, ICET came to the rescue with a much-needed grant."

People could now enjoy the facilities in a warm, dry building for many years to come. The premises have also been splendidly redecorated.

Angela Haymonds, secretary of ICET, said: "We are delighted to have contributed. Moss Bank Mission has been given a new lease of life and I hope everyone, young and old, continues to enjoy it."

The mission is one of many community projects funded by ICET. It supports schemes in St Helens and other places, where Cory Environmental has sites with links to Ibstock Brickworks.
Item added : 3rd August 2019
by UCCrew