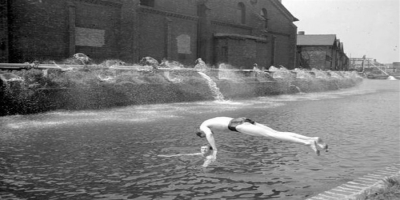 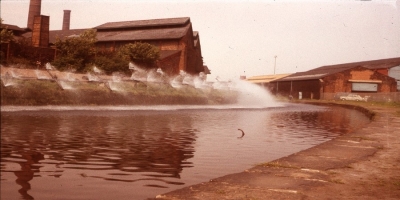 n the town centre of St. Helens there is a section of the Sankey Canal known locally as the “Hotties”. Pilkington’s, the local glass manufacturer dammed the canal to create a reservoir. This reservoir provided cooling water for their nearby works and then this water then returned to the canal through sprays which produced large clouds of steam and as the water was hot it also raised the temperature of the canal quite considerably.

It was not unusual to find locals taking a dip in the canal after a hard days work at the glass works. It was about the mid 1960’s when Owens pet shop on Westfield Street closed down that the ravenous cichlid fish appeared in the canal. According to rumour, the owner of the shop decided to dump its remaining tropical fish stock into the warm waters of the “Hotties”. The cichlids thrived, much to the annoyance of local anglers who reported that these aggressive fish use to bite through their lines!

These fish survived for a number of years until the glass works turned off the hot water for a few weeks to carry out some maintenance work and the fish perished as the water cooled down.